A downloadable ONE SHOT for Windows 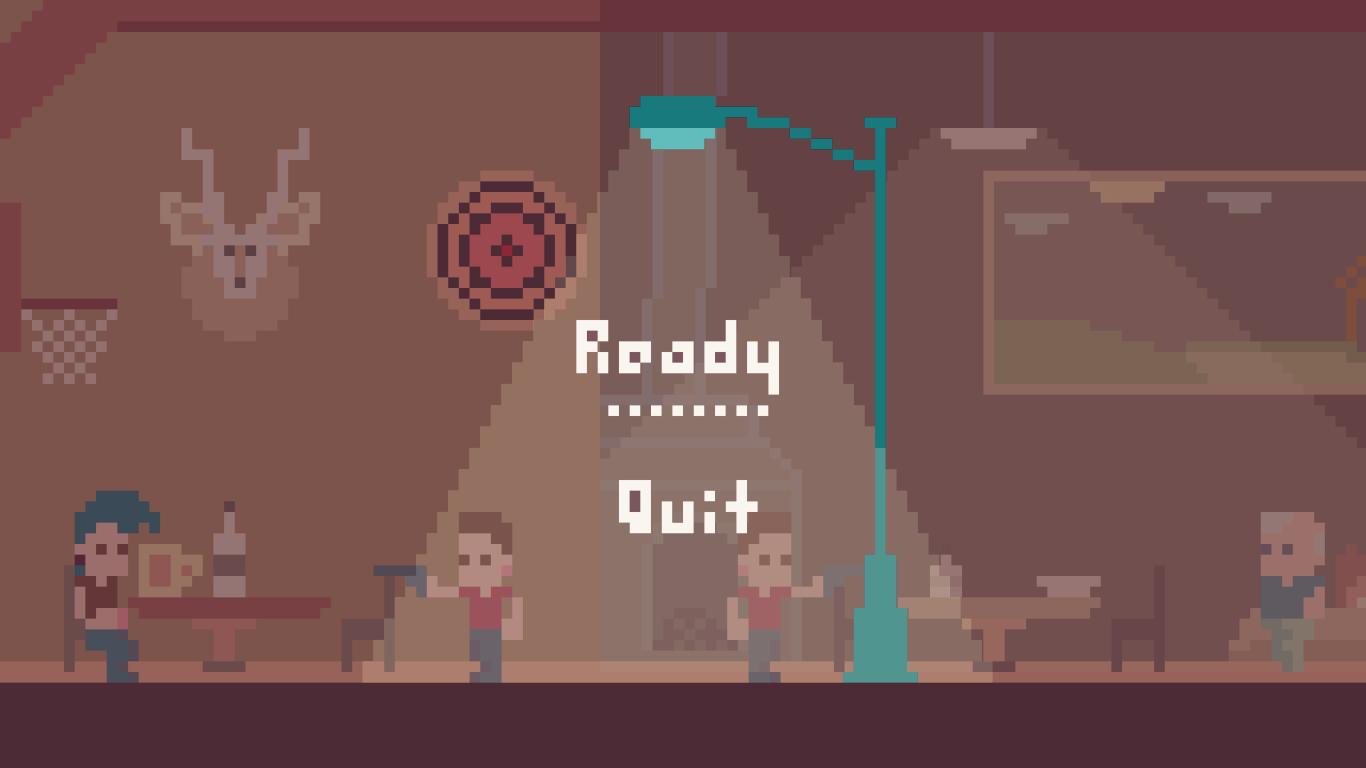 ONE SHOT is a 2D pixel art videogame  made by onbox GAMES, a one person company, @xrobergmz.

This game came out with the idea of making a detective like videogame for the No Shit Sherlock Jam, Hosted by @Ludipe. I end up with the concept of making a videogame in wich you play like a man whos wife was murdered and decided to buy a gun with only one bullet to find her killer and finish (him/her).

If you are intrested in playing the game please do it before continue to read this lines. There will be "Spoilers" because i want to tell about the making process and the general thoughts about the game concept.

Instead of like traditional detective games where you find the clues and lead you to the killer, in this game there is no clear killer. So you will have to use your instint to kill the right person... or not.

The fact that there is no clear killer and everyone is suspicius, make you think about what you are about to do. Are you willing to end up with a life of another person just because of your suffering even if you are not sure who the murder is? This is how human behavior works? Thouse things were the first one i wrote on a word document when starting develop the game.

After lot of feedback recieved  from more than 130 players, i decided to add more conflict between characters and made a story ending. It happens when you get certain information from specifics characters in the game.

I choose pixel art mainly because is easier to me, but then my goal was eaven further, was to develop abilities making a pixel perfect game. This was something i wanted to experiment with and i took the opportunity.

Also i wanted to develop a small dialog system, but a difrent one. No needs of pushing a button to continue.  I manage to get the result that i was looking for, with a dialog that has two difrent variants, the first one, when you get close to someone, that person can start talking you and you can stop and listen or you can just ignore at what he/she is telling you, and of course the second one, you can interact with someone and start a conversation, but all of this without taking off the free movement of the player.

Then i realized that as the camera was in pixel perfect view and the pixel size of the sprites was set from the begining, i needed to choose a pixel art font quite small, but readable. Tha´s the font you can find in game. Although, some times it is a bit difficult to understand certain words but they can be figured out just by the context.

Im a music lover and maker, and i made two songs for this videogame but for some reason, the musc in-game was distracting and was geting me out of the experience, so i decided to mute them, just left the cricket sound when the player is walkin throught the Town. This way seems to me more envolving than with the soundtracks.

The time runned out quickly and the final hours where dedicated to make the dialogs. I wish had more time to polish the conversations and add narrative archs and deeper relations between characters.

A special feature i wanted to be in the game from the first moment was the aiming mechanic, when you are aiming to a certain person, he/she feels threatened and start giving you lot of information, but in some cases it happen the oposite, the person just stop givin you details because is afraid, so you need to be carefull with it.

Thanks for reading. Leave a comment if you liked it.

In order to download this ONE SHOT you must purchase it at or above the minimum price of $2.99 USD. You will get access to the following files:

Really cool and interesting game! Had a bit of trouble reading some of the text, but I think I got the major parts of the story.  Also I had a ton of fun just shooting random people! And I loved the idea behind the "ending"!

OMG! I loved the video. You are awesome!

I loved the way you played the game, the way you were figuring out all the story behind, in spite of the pixel font. And the most, all those questions you made yourself at the end of the game are the real goal. That´s how i really wanted the player to feel like. You nailed it.

I had an incredible time watching your gameplay. Thanks a lot for all your time (cause it takes a lot to kill every single player in the game).

Wish you the best.

Thanks, some times it is not about the money, its about creators sharing their creation with the world. Really apreciate your comment. Hope you like the game.

New verrsion and full release of ONE SHOT. Dont forget to leave  a comment. Thanks. 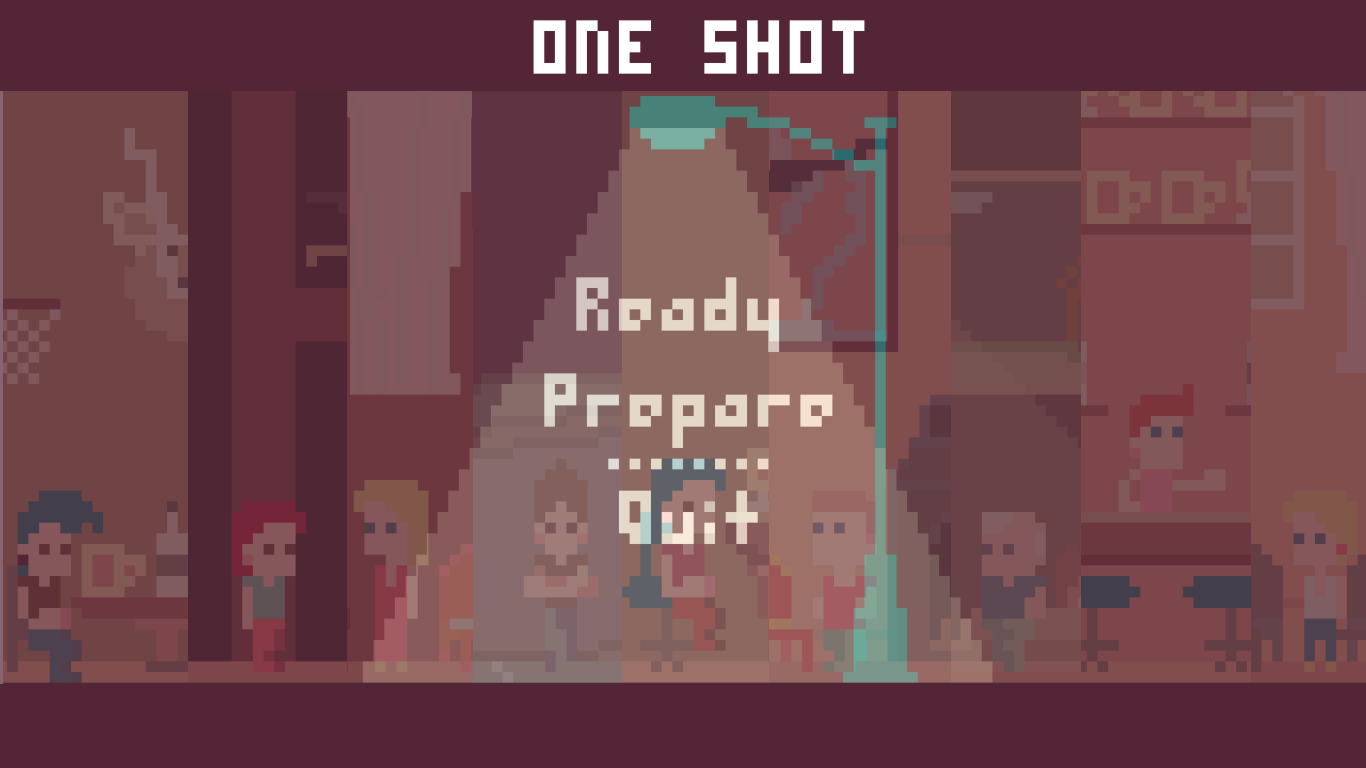 Reply
sirfancylot3 years ago
CAN YOU SPOT THE MURDERER? | One Shot Full Gameplay Walkthrough
Reply
Gazbriel3 years ago

Woooww, great video. Lot of feedback and realy funny. Thanks a lot.

How the heck do I shoot I would like to play, but I can't even get past the first part because I don't know how to shoot

You can aim either pressing the R button or the left Control. And while aiming yo can press the F or Return to shoot.

The idea is that the player at the begining find out how to do it. I'll work on making it more intuitive.

Really thanks for playing and for leaving a comment. I really apreciate it.

Thats what I thought but when I do that nothing happens my dude just puts his head down.

When the girl ask you to shoot you can aim to the right but cant shoot. The player says he has not the determination yet to do it. But when the conversation ends you can talk to her by pressing the Return or F Button and she prepare your weapon with one bullet and then you can shoot.

Thanks for playing the game and leaving a comment, it helps me a lot to get feedback and improve this game and other ones in the future.

srry for bothering you with the questions, but I played the game and I think it is a really cool concept. I was wondering who is the killer since the player doesn't know or did you want the player to just decide for himself.

No bothering, im here to answer all the questions you could have, a videogame is nothing without the players so i need you to play it and let me know how you feel about it. Thanks a lot for playing and for your opinions. Im so happy you liked it, it means the world to me.

Well, that´s part of the idea of the game. It would be easier to put the comands on screen but i wanted to make the player feel jus like the character in the game, who has no idea of how to shoot a gun at the begining and he has no the streght to make it, but when you find out how to do it then you need to think who deserves  it.

Thanks for playing and comment.
Sorry if the experience was not what you thought.

The screenshots look awesome, but unfortunately when trying to run the game on a Windows 10, there is only a black screen after the Unity logo had came up.

Thanks a lot for your comment. I just fixed the problem. If you download the game again there willl be no black screen. Hope so. If you can check it and notify it will be great.

It's working now. It's a great game. Very intense. I really like the art style. A longer game in this style would really work, but slightly higher resolution might be needed to make the reading less of a chore on a longer game. For this length of game, though, it was perfect. The way the dialogue works, with the characters talking and you deciding to stay and listen or walk off is brilliant. For some reason, it reminded me of the game "Night in the Woods". Well done.

I really apreciate your words. Im so happy and excited that you liked the game. Thanks for the tips, i´ll keep them in mind for my next proyect. 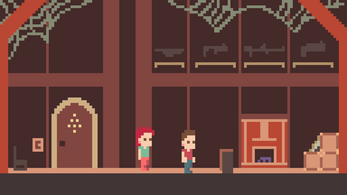 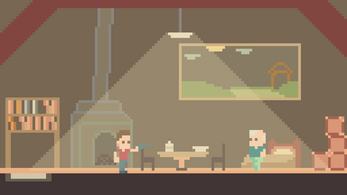 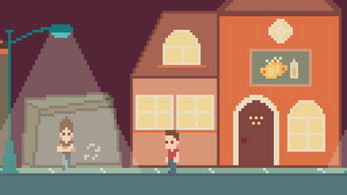